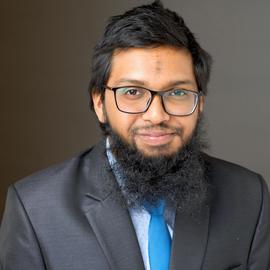 Md Fahim Sikder is a Ph.D. student who works on Synthetic Time-Series Data Generation with Privacy under the supervision of Professor Fredrik Heintz at IDA, Linköping University, Sweden. Fahim was a Lecturer in the Computer Science and Engineering department at the Institute of Science, Trade, and Technology (ISTT). In addition, he was the Coordinator of the HEAP Programming Club, ISTT, and Coach of the ACM ICPC team in ISTT.

Md Fahim Sikder conducted several workshops and seminars, including a Workshop on Latex and a Week-long training course on Python (Beginning to Advance including Machine Learning). He participated in several National and International Contests. He achieved many titles, including “Champion at International Contest on Programming and System Development (ICPSD), 2014”, and “Champion at NASA SPACE APPS CHALLENGE 2016” in Rajshahi Region, Bangladesh. Handwritten digit or numeral recognition is one of the classical issues in the area of pattern recognition and has seen tremendous advancement because of the recent wide availability of computing resources. Plentiful works have already done on English, Arabic, Chinese, Japanese handwritten script. Some work on Bangla also have been done but there is space for development. From that angle, in this paper, an architecture has been implemented which achieved the validation accuracy of 99.44% on BHAND dataset and outperforms Alexnet and Inception V3 architecture. Beside digit recognition, digit generation is another field which has recently caught the attention of the researchers though not many works have been done in this field especially on Bangla. In this paper, a Semi-Supervised Generative Adversarial Network or SGAN has been applied to generate Bangla handwritten numerals and it successfully generated Bangla digits.

Installing Texlive Latest Version (Texlive-2021) on Ubuntu-20.04/18.04
Hello there! In this tutorial, we will learn how to install the latest version of texlive in the ubuntu system! Generally, Ubuntu 20.04 / 18.04 only install Texlive-version-2019 from the local repository!
Md Fahim Sikder
Oct 1, 2021 3 min read Tutorial, Blog Post

Installing Docker, Creating & Running First Python Script Using it on Ubuntu 20.04 LTS
I always get in trouble when creating a new project with different dependencies installed on my machine. I had to reinstall new libraries, which is doing a new thing repeatedly, and it’s time-consuming.
Md Fahim Sikder
Dec 26, 2020 5 min read Tutorial, Blog Post